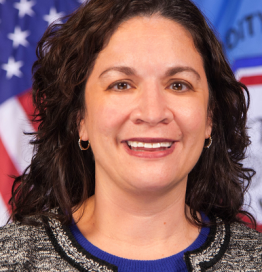 Melissa Netram recently began as the Chief Innovation Officer and Director of LabCFTC at the CFTC.  LabCFTC’s mission is to promote responsible innovation among financial industry, stakeholders, and policymakers by advancing policy, facilitating dialogue and educating stakeholders.

Prior to the CFTC, Melissa worked for 9 ½ years in Intuit’s Corporate Affairs department, responsible for working closely with the business teams to ensure the government strategy aligns closely with their business strategy.  Melissa and her team focused on technology, cybersecurity, small business and financial services policy issues around the globe.  She was one of the founding members of the Financial Innovation Now Coalition, one of the first fintech coalitions in the DC area.

Prior to Intuit, Melissa worked at the Financial Services Roundtable, working on legislative and regulatory issues affecting the financial services industry.  Here, Melissa played a key role in actively lobbying and shaping the Roundtable’s legislative strategy regarding the Dodd-Frank Act.  From 2003-2007, Melissa worked for The McGraw-Hill Companies.  While originally focused on developing and shaping the corporation’s privacy policies, Melissa also lobbied for Standard & Poor’s, working on the Credit Rating Reform Act of 2006, and for Platt’s, focused on energy related issues.

Melissa began her career at the U.S. Department of Treasury as a Presidential Management Intern (now referred to as Presidential Management Fellow), rotating throughout the Office of Domestic Finance and the Office of the Comprtoller of the Currency. While here, Melissa worked on creating terrorism risk insurance, the Fair and Accurate Credit Transactions Act which enabled free credit reports, and coordinating the interagency work on the Gramm-Leach-Bliley study on financial privacy notices.

Melissa received a J.D. from The Catholic University of America, Columbus School of Law and a Bachelor of Science in Business Administration from Villanova University.  She is licensed to practice law in the State of Maryland.

Melissa resides in Maryland with her husband and three daughters.