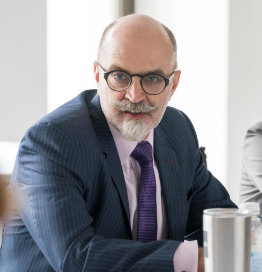 Jason Healey is a Senior Research Scholar at Columbia University’s School for International and Public Affairs specializing in cyber conflict, competition and cooperation. Prior to this, he was the founding director of the Cyber Statecraft Initiative of the Atlantic Council where he remains a Senior Fellow. He is the editor of the first history of conflict in cyberspace, A Fierce Domain: Cyber Conflict, 1986 to 2012. A frequent speaker on these issues, he is rated as a “top-rated” speaker for the RSA Conference and won the inaugural “Best of Briefing Award” at Black Hat.

He helped the world’s first cyber command in 1998, the Joint Task Force for Computer Network Defense, where he was one of the early pioneers of cyber threat intelligence. During his time in the White House, he was a director for cyber policy, coordinating efforts to secure US cyberspace and critical infrastructure. He created Goldman Sachs’ first cyber incident response team and later oversaw the bank’s crisis management and business continuity in Asia. He served as the vice chair of the Financial Services Information Sharing and Analysis Center (FS-ISAC). He is on the review board of DEF CON hacker conference and served on the Defense Science Board task force on cyber deterrence. He started his career as a US Air Force intelligence officer with jobs at the Pentagon and National Security Agency and is president of the Cyber Conflict Studies Association.